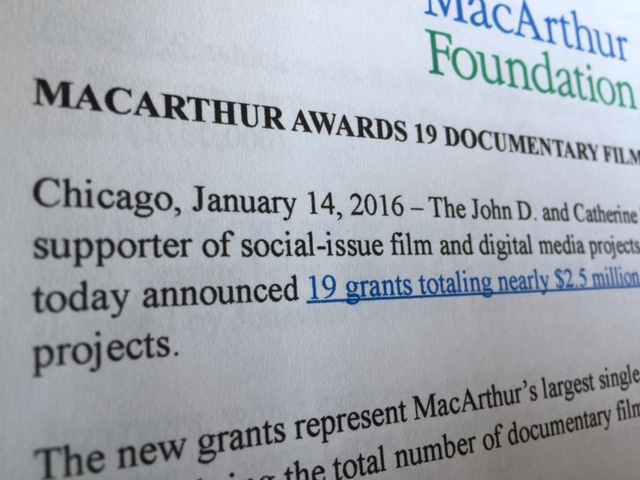 CHICAGO, IL, January 14, 2016 — Today the John D. and Catherine T. MacArthur Foundation announced a $100,000 grant and partnership with Project& in support of Working in America, which takes an intimate look at how we feel about what most of us do all day long: work. Working in America is a multi-platform documentary initiative chronicling the everyday challenges, triumphs and realities of working (and not working). Within the common thread that everyone has a relationship to work, this powerful visual and audio initiative is inspired by the 40th anniversary of Studs Terkel’s influential book, Working, as a springboard for a contemporary conversation about the meaning of work and the physical and psychological realities of working in America today.

As Jane M Saks, President/Artistic Director of Project& and Creator of Working in America explains, “What Studs Terkel understood 40 years ago has exploded onto the mainstage of America: Our ability to work and the value placed on us and our labor significantly defines our sense of identity, dignity, and humanity, and that of our entire country. This initiative gives the changing and complex landscape of working in America the human focus, engagement, and creativity it deserves at a time when we are collectively gearing up for an election that could show what we value (or don’t) by voting on the direction of our nation’s economy and political future.”

Project&’s Working in America is one of only 19 grants awarded for documentary and interactive projects. These grants, totaling nearly $2.5 million, represent MacArthur’s largest single-year investment in documentaries. “It was an extremely competitive year,” the Foundation states, “We are delighted to include Working in America in this group of outstanding and important documentary and nonfiction multimedia projects.”

Working in America includes three components: a nationally traveling photographic exhibition featuring images of veterans, janitors, tech and finance entrepreneurs, farmers, athletes, oil field workers, artists, domestic caregivers and more from across the US captured by Pulitzer-Prize winning photographer and Project& Fellow Lynsey Addario. The exhibition will be designed by renowned architect Jeanne Gang and Studio Gang. Working in America will launch at Chicago’s famed Harold Washington Library on Labor Day Weekend 2016 with a series of compelling programs, and the exhibition will travel to city libraries across the US in 2017 and 2018. The initiative also includes “Your Working Story,” a dynamic online archive that provides everyone the opportunity to upload images of themselves and their working stories; and Project& will assist local libraries in developing programming and dialogues that ask how we can reimagine work to enhance the dignity and quality of life for individuals, families, communities, and the nation.

Project& has partnered with Radio Diaries to co-produce a radio series titled “Working Then and Now” that will broadcast on National Public Radio’s “All Things Considered.” Project&—working with The Studs Terkel Radio Archives, Chicago History Museum, and the Library of Congress—has been given unprecedented and exclusive access to the never-before-heard field recordings Terkel conducted for his book. “Working Then and Now” expands on these recordings with current interviews with those he interviewed 40 years ago and with workers today. The radio series will reflect upon the dramatically changing American working landscape, charting the decline of the manufacturing industry and the rise of the “gig economy” alike, knowing that Terkel’s research remains more relevant today than ever.

Other key partners in the Working in America initiative include Access Living, exhibition design by Jeanne Gang and Studio Gang Architects, Chicago Public Library, the US Department of Labor, The Center for American Progress, the Chicago History Museum, the Library of Congress, National Domestic Workers Alliance, Rap Sessions, the Shriver Center for Poverty Law, Spark, Women Employed, YOUMedia, and the Reva and David Logan Foundation.
Project& wants to know your working story! What does work mean, look and feel like to you, your friends, and your family? Post your story and you’ll have the chance to be featured by Project&! You can do so by tagging Project& in your vintage and/or contemporary photos of working in America and using the hashtag “#workinginamerica.” You can find us on Instagram at @project.and, on Twitter @_projectand, and at facebook.com/projectand.